A poor year for dragonflies and damselflies

I'm afraid that I've neglected this blog terribly this year, but of late the garden has become full of lots of exciting little critters so I can't keep from posting any longer.

It's been a very poor year so far for dragonflies at Frog End. Although lots of damselflies emerged several weeks ago we haven't seen one for over a month and this female southern hawker is the only dragonfly we've had so far this year 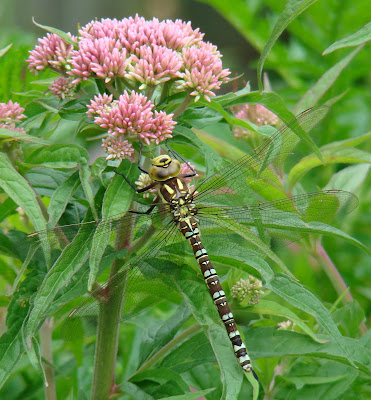 I wonder if the harsh winter killed off a lot of larvae. Certainly the drought earlier in the year would have done - we were very sad to find that one of our favourite nature reserves for odonata - the Old Sludge Beds in Exeter had dried up almost completely by early summer.

I was very pleased that the hawker chose to land on the native flowers in our garden (this one's hemp agrimony) - whilst I do have hundreds and hundreds of southern hawker photos most show them perched on trees or bushes rather than flowers. 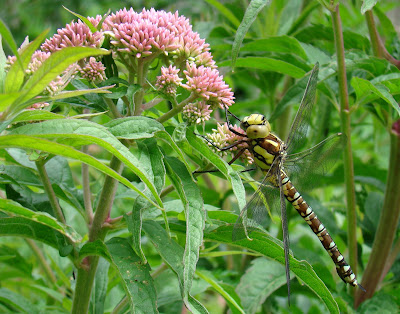 The odes will recover. A few years ago the local park drained both it's big ponds and after filling them back up, it was bad in the way of odes. Now a few years later the ponds are hopping. Our pond is swarming with odes right now. Many are chasing my bees around my hive.

Thanks Adrian - the weather's beautiful here in Devon right now. Fingers crossed it holds for a couple of weeks.

Randy it's great to hear about your local park - fingers crossed that our local populations recover as easily.

The populations at Thurstaston also remain fairly static depsite some of the main poold drying up every hot summer. I wonder how|/